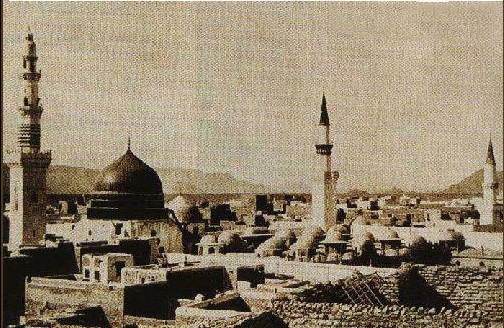 “The Prophet’s Companions supported him in firmly establishing his Shari‘ah during his lifetime and after his death. They succeeded him in protecting it and keeping it in good custody”.

“In numerous revealed texts Allah has indicated explicitly how He granted them excellence above others, commanding that they also be taken as examples to be emulated. And he gave severe warning against following paths other than theirs. He brought them to make their home in Madinah, the homeland of His Revelation, the ultimate refuge of His deen and the place where His Shari‘ah was instituted and established, the land to which His angels came down, the place of the hijra of the Messenger of Allah, may Allah bless him and give him peace, the place in which His book was revealed, the land where the legacy of all His messengers was brought together to live forever, the place where all good was joined together. The cave of iman and wisdom, the golden mine of the Shari‘ah and Sunna, the radiant lamp of guidance by the light of which the regions of the East and West were illuminated. The unending fountainhead of knowledge from which all rivers, valleys and tributaries draw their water.”

“Allah then caused the Companions to be succeeded in each generation by followers of thorough truthfulness and justice.”

And later on in the book, Qadi ‘Iyad mentions this narration:

“From Abu Hurayra, may Allah be pleased with him, “The one upon whom we ask blessings and peace, said, ‘The Hour shall not take place until Iman returns to take refuge in Madinah just like the snake returning to take refuge in her hole.’ ”Abu Mus‘ab al-Zuhri** said regarding this hadith, ‘By Allah! It shall not return and take refuge but among its true followers and its people who establish it completely and properly and who institute in their lives its various precepts and laws, and who have knowledge of its proper interpretation, establishing firmly its rulings by which it judges.’ ”

*Qadi ‘Iyad is ‘Iyad ibn Musa ibn ‘Iyad ibn ‘Imran, Abu al-Fadl al-Yahsubi, born in Sabta (present-day Ceuta, on the Strait of Gibraltar) in 476 H (1083 CE). The Imam of western Muslimdom in hadith and Arabic lexicology, he was a gifted Maliki scholar and author who wrote a number of books in the sciences of hadith, Maliki jurisprudence, and history, though he is best remembered for his two-volume al-Shifa bi ta‘rif huquq al-Mustafa [The cure, in outlining the attributes of the Chosen One], universally acknowledged as among the finest works ever written on the Prophet (Allah bless him and give him peace). He was appointed as the judge of Sabta, then Granada, and finally Marrakesh, where he died in 544 H (1149 CE) [Excerpted from Reliance of the Traveller, by Shaykh Nuh Keller, p. 1089]

**He is the learned Scholar and trustworthy hadith Master of Madinah, Abu Mus‘ab Ahmad ibn Abi Bakr ibn al-Harith al-Zuhri (152 – 242 H). He was one of those who narrated the Muwaṭṭa directly from Imam Malik [cf. The Four Imams and their Schools, Shaykh Gibril Fouad Haddad, Muslim Academic Trust, 2007, p. 145]