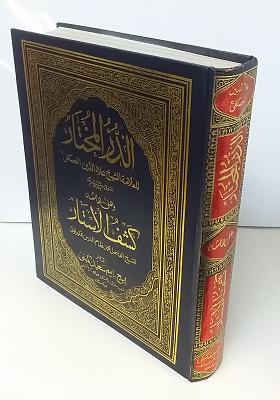 Book of Prayer, Section on Imāmah

It (the Imāmah) is either minor or major. The major (type) (i.e. the caliphate) is the right of general administration over the people. Its study is in ‘ilm al-kalām (scholastic theology) and establishing it is the most important of obligations**, hence they (the Sahabah) gave it priority over the burial [1] of the Possessor of Miracles (ﷺ).

*The Durr al-Mukhtār [‘The Chosen Pearl’] is one of the central late texts of the Hanafi school. Its author, ‘Ala’ al-Dīn al-Haskafi (Allah have mercy on him), was the Grand Mufti of Damascus during the 11th Islamic century, and his works, particularly the Durr, profoundly influenced all texts that came after it, and became the central reference for legal details and rulings (Shaykh Faraz Rabbani).

“Al-Durr al-Mukhtār, the commentary on Tanwīr al-Absār, has flown through the lands, and circled the cities, and become more manifest than the sun at midday, until people have busied themselves with it, and it has become their recourse. It is most deserving of being sought, and of the school (madhhab) being on it… for it contains more well-verified rulings, and sound details than many a longer work…” [Ibn ‘Abidīn, Radd al-Muhtār, 1: 2] (ibid)

**Explaining this point, Ibn ‘Abidīn states in his commentary Radd al-Muhtār: “it is of the most important of obligations because the fulfillment of so many other shari‘ah obligations depend on it”

[1] Ibn Kathīr said, “What is famously related from the majority of scholars is that the Prophet (ﷺ) died on Monday and was buried on Tuesday night.” (al-Bidāyah wa al-Nihāyah (5/237) and Ṣaḥīḥ al-Sīrah al-Nabawīyyah, p.728)