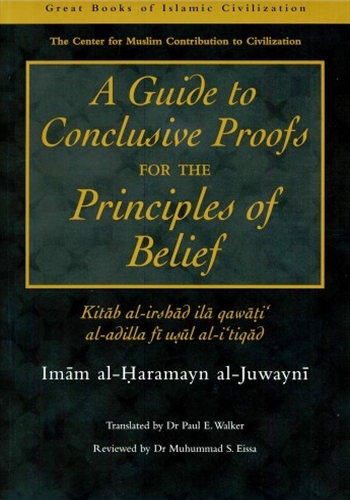 Imam al-Haramayn al-Juwayni (Shafi‘i school of jurisprudence)
He was the teacher of Imam al-Ghazali, the mujaddid of the 5th hijri century. His Kitāb al-irshād ilā qawāṭi‘ al-adilla fī uṣūl al i‘tiqād (A Guide to Conclusive Proofs for the Principles of Belief) dedicates several chapters to the Caliphate. Explaining his decision to include this subject matter in his book on ‘aqīda, he states “that the danger of falling into serious error over it is too grave for someone to remain ignorant of the principle involved here”. He goes on to say that “our purpose in this handbook is to proclaim the basic principles of the topic and, accordingly, we cite those that are certain (al-qawāṭi‘). With the aid of Allah (تعالى), we distinguish those that are subject to the interpretation of experts from those that are of conclusive certainty (al-qaṭ‘īyyāt)” (p. 225 of the English translation). Fundamentally, “one of the things the imamate is based on is decisive (qaṭ‘ī) knowledge of the validity of the consensus of the community” (ibid., p. 229).

The following section headings are elaborated upon by Imam al-Juwayni:

The Doctrine of the Imamate
On the Denial of Succession to the Imamate by Designation and the Affirmation of Election
On Election, its Characteristics, and How the Imamate is to be Invested
Our Doctrine Affirms the Imamate of Abu Bakr, ‘Umar, ‘Uthman and ‘Ali, May Allah be Pleased with them All

“The position of Agreement (ijmā‘) is that it is necessary to appoint an Imam. The difference of opinion is on the question whether [the appointment] must be by Allah or by His servants, and whether the basis [for appointment] is textual evidence (dalīl sam‘ī) or reason (dalīl ‘aqlī).  The correct position is that the servants must appoint a Caliph on the basis of textual evidence because of the statement of the Prophet (ﷺ), “Whoever dies not having known the Imam of his time, dies the death of the days of Ignorance (al-jāhilīyyah).” [Musnad Ahmad, IV, 96]
And they must appoint someone, since the people at the time of the Prophet’s (ﷺ) death made this question the most important matter of consideration, so important in fact that they considered it more important than the matter of his burial, and so also has it been after the death of each Imam. And they must appoint someone for so many legal obligations are dependent on the Imam, as he (al-Nasafi) has indicated in this statement:”

“The Muslims simply must have an Imam, who will carry out the administration of their decisions, the maintaining of their restrictive ordinances (ḥudūd), the guarding of their frontiers, the equipping of their armies, the receiving of their zakat, the punishment of those who rebel and those who spy and highwaymen, the establishment of jumu‘ah and ‘Eid, the settlement of disputes which take place among the servants (of Allah), the acceptance of the testimony of witnesses in matters of legal rights, the giving in marriage of the young men and women who have no guardians, and the distribution of the war booty” [al-Taftazani adds in his commentary:] “and similar matters which other individuals from the Ummah are not allowed to be in charge of”.

[Cf. A Commentary on the Creed of Islam: Sa‘d al-Din al-Taftazani on the Creed of Najm al-Din al-Nasafi – Translated with Introduction and Notes by Earl Edgar Elder, New York, Columbia University Press, 1950, pp. 145]

“They reached consensus on the obligatory nature of the appointment of the Imam, the only difference being as to whether it is obligatory on Allah or on people, with transmitted or intellectual evidence.
The position of the people of the Sunnah and the great majority of the Mu’tazilah is that it is an obligation on people because of:

1. evidence transmitted in his words, (ﷺ), in that which Muslim narrated in the hadith of Ibn Umar,

, in this wording: “Whoever dies without an Imam dies the death of the time of ignorance,”

2. and because the Companions,

, considered the most important of all matters to be the appointment of the Imam to such an extent that they gave it precedence over his burial, (ﷺ),

3. and because there is no avoiding the necessity of the Muslims having an Imam who undertakes to execute their legal judgements, establish their hudud limits, protect their borders, equip their armies, take their zakat (sadaqat), conquer insurgents, thieves and brigands, establish the jumu’ahs and the eids, marry off young people who have no guardians, divide up the spoils of battle, and the similar duties of the shari‘ah which individual members of the ummah cannot take upon themselves.”
[Translated by Sidi Abdassamad Clarke]

The topic of the Caliphate/Imamate in works on creed
The classical trend of including this juristic (pertaining to law) topic in books and essays on uṣūl (beliefs) is proof of the foundational nature of the Caliphate and the importance given to this matter in the book of the Lawgiver, Allah

and in the Sunnah of his Messenger (ﷺ).

This point will be illustrated further in the last post in this series, in which the creedal works of Imam al-Tahawi, Imam al-Bayhaqi and Imam al-Baqillani will be examined.